It’s the end of an era at Keller UK as Construction Manager Mark Bragg has retired after 44 years with the company. 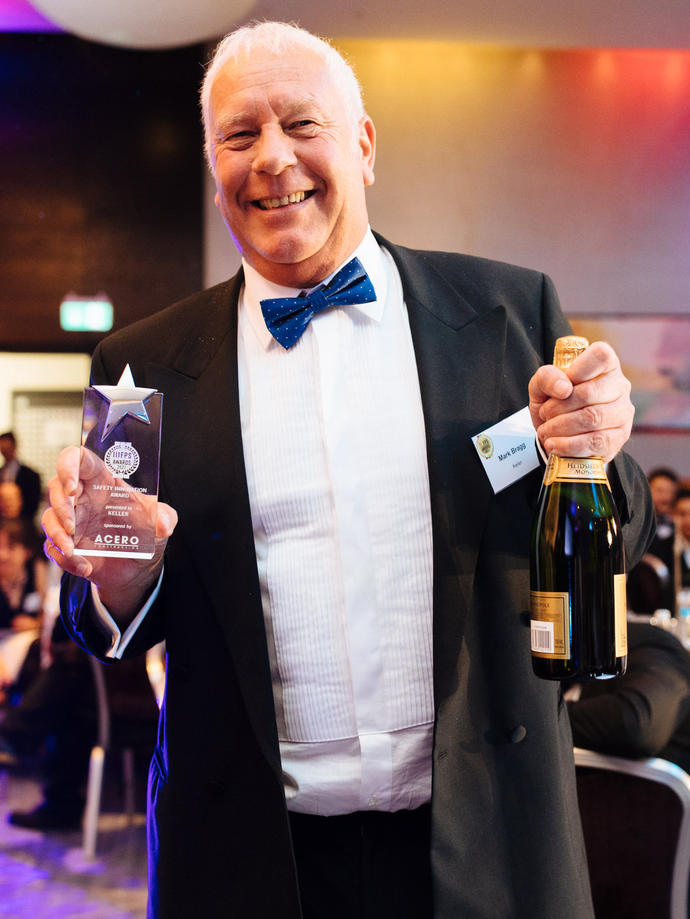 Mark receiving an award for Keller at the FPS Awards 2021

Mark joined as a 17-year-old in 1978 and has seen massive changes in the ground engineering industry both inside and outside the company in that time.
“I love Keller, it has been my life. I’ve spent more time working at Keller than I have at home,” said Mark, who is 61.
“They’re a good company. You only have to look at the number of long-serving people in the business to know that. I can look back and say I have no regrets.”
Mark joined Keller after they sponsored his course at the National Construction College in Norfolk.
It was August 14, 1978 and Mark was told to report to a site in Wimborne, Dorset.
“I was just given the address and told to turn up. I knocked on the door of the cabin and the foreman John McFadzean opened it. He was a big Scotsman who was convinced I was a management spy!”
“The first thing he said to me was ‘Get down to Woolworths and buy yourself a sleeping bag’. He’d hired a cabin and all the site lads stopped in it, sleeping on the floor. Obviously it wasn’t allowed then or now but it was great, you saved your lodge money and he’d cook for us every night.”

John took Mark under his wing and showed him the ropes of the piling game and after five years of working on sites he became Keller youngest foreman at the age of 22.
“I wanted to progress as when I was a machine operator I got frustrated because I could see how jobs could be run better,” said Mark.
Mark was at the forefront of Keller’s efforts when CFA piling was introduced in the UK in the mid-1980s and spent many years running Keller’s major projects through the 1990s and into the new millennium.
When Jim De Waele arrived as Keller UK managing director in 2008 he created the wider roles of works managers and construction managers. Mark was already carrying out most of the duties of the Construction Manager’s job, but the new roles formalised it.
“It was a much wider role overseeing supervisors and site guys and having input into other areas of the business, training, procurement, labour hire etc. Then there were also the site visits, so it was all quite hands on.
“You’re a mixture of policeman, social worker and politician, trying to get the best out of everybody. The Construction Manager is the glue between different departments that keep it all together.”
“I think my experience in coming up through the ranks in the company helped make the job easier. I know everybody and have grown up with many of them in the business.”
As well as changing roles and people, Mark has witnessed massive changes in the geotechnical industry over the past five decades.
“The biggest change was the introduction of piling platforms,” he said. “Rigs used to go over at the rate of one a year, but properly designed platforms changed all that.”
Mark also pointed to the introduction of CFA piling and the use of ready-made concrete delivered to site, which had a big impact on productivity, as major changes he has witnessed.

“CFA was a really hard system to pick up,” said Mark. “Then ready mix concrete came along and when we first went on it, it was a nightmare. There were no mobile phones, so you had to find a phone box to arrange/alter deliveries. If there was someone in the phone box you were in real trouble!”
Other major changes came in health and safety.
“When we first told to wear hi-vis clothing people didn’t want to but you wouldn’t dream of going near a site now without the proper PPE."
The facilities on site have also improved considerably.
“In my early days you were lucky if there was a toilet on jobs,” said Mark.
He has worked on many major projects in his time at Keller including London’s Olympic Stadium, the Millennium Dome (now the O2 Arena), the Crossrail underground line in the capital, Canary Wharf, now the heart of London’s financial industry and the current High Speed 2 railway project.
Mark’s retirement will also leave a big hole at Keller as Managing Director Bob Thompson explained.
“He has helped lead and inspire the Foundations team through good times and bad; and managed to keep a cheery disposition throughout, despite the constant changes to our industry.
“On behalf of all at Keller I would like to thank Mark for his hard work and dedication and for the advice and support he has afforded me over the years. It has been invaluable and very much appreciated. He will be missed.“
So what’s next for Mark after 44 years with the same company?
“I’ve given so much to the job that I don’t have any real hobbies,” he said.
“I have my uncle’s 20-acre smallholding to look after as he is in a care home and I’d like to do more travelling with my wife Sally.
“It will take a couple of months to adjust but I could be back asking for a job before too long!”

I love Keller, it has been my life. I’ve spent more time working at Keller than I have at home.
Mark Bragg
Construction Manager
Published on
8 Apr 2022