Keller has completed work on some of the deepest jet grouting ever carried out in the UK at London’s super sewer project.

Keller at the Tideway site at Blackfriars

The Tideway project involves the construction of a 25km ‘super sewer’ under the River Thames. Not only will this alleviate pressure on London’s inadequate 150-year sewage system, but it will also boost the river economy, create attractive new public spaces and generate thousands of jobs.

The Blackfriars Bridge Foreshore site drop shaft on the Tideway central section, designed to connect the existing Fleet sewer outfall and the northern Low Level 1 sewer into the new tunnel, came with several challenges to construct due to its central London location and restricted working area over the river.

One of the most significant aspects of the project was that it marked the first time jet grouting had been carried out at such depths in the UK, within the target strata and with the column diameters required.

“The original intention was to install diaphragm walling, which is often used for shaft construction, but that wouldn’t have been possible due to the constraints of the site,” said Bruce Stephenson, Keller’s Contracts Manager. “So the designer asked if jet grouting the sand layers – which would be faster and more cost-efficient – was an option. But with little experience of using that technique at depths reaching 65m within the target stratum, we first proposed a trial to validate the concept.”

The Keller team, with support from its global product team (GPT), successfully completed the trial at a shaft at Kirtling Street, gaining valuable data and proving the column diameter as such depth.

With potential for drilling deviation at such depths, and the need to form columns in difficult strata, the objective was to ensure that diameters of approximately 2m could be achieved and that interlock between columns was possible when considering drill deviation.

One of the main reasons for the trial’s success was that Keller used its own patented Soilcrete double special system, which has greater efficiency over other standard jet assemblies, directing air and grout at consistently high pressure and velocities to disaggregate the soil. This creates a more stable and efficient product with larger diameter columns.

The trial showed jet grouting was viable. And, after some improvements to the design using GPT expertise to increase the column diameters to around 2.2m, Keller was awarded the Blackfriars shaft contract. Engineers then spent several months working closely with the client to meticulously plan the work, with one of the main challenges being the actual site itself.

“The Blackfriars site was complex because there was very little space to work,” says Bruce. “The site literally had to be built up out of the River Thames using a cofferdam around 11m wide and 80m long, with the lower level barely much bigger than the shaft diameter itself. Once we had all the equipment, there was little room to manoeuvre.”

That equipment included a 52-tonne KB6 drill rig, a high-capacity mixer, two high-pressure grout pumps (one for back-up), an excavator and 8,000 tonnes of cement.

In keeping with Tideway’s commitment to keeping lorries off London’s congested roads, everything was delivered to site by barges travelling along the Thames.

The project began in September 2018, with three crews working in shifts around the clock for three months solid, completing the jet grouting.

“A project like this takes a lot of hard work by a lot of people to make it a success, and we were able to call on an international team of experts, both in the design and construction phases,” says Bruce. “Our jet grouting system is unique and no one else would have been able to achieve the same result. We were able to work closely with the client for months to plan everything, right down to the last detail.

“As a company we’ve learned a lot from this. All that information on deep drilling, drill deviations and jet grouting these conditions can now be fed into the rest of the Keller Group via the GPT, broadening our portfolio.

An aerial view of the Blackfriars site A KB6 rig built by Keller carries out the jet grouting 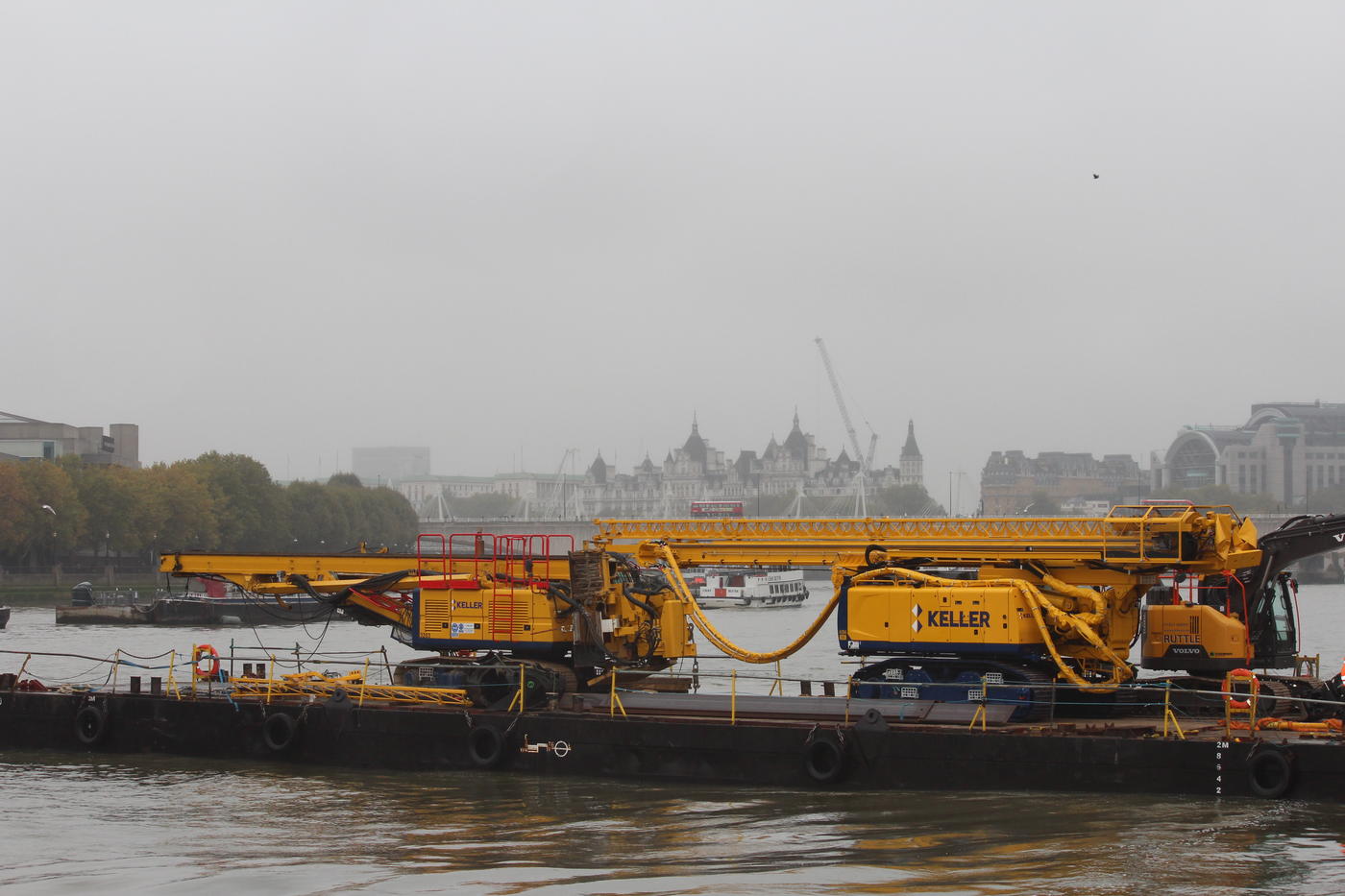